I’ll be honest: I used to judge those parents who would say, “I can’t make him X, Y, or Z.” I used to comment to my coworkers, “Come on, who’s the parent here?” I used to vow that would never be me.

That was before I had a sensitive and stubborn child of my own. Who is so self-conscious about pooping that she held it in, requiring medical intervention and a laxative that makes holding it impossible, as hard as she still tries. Who fights sleep for up to two hours every. single. night. Who was so traumatized by pooping in the shower that she now refuses to bathe (without an intense struggle, anyway–including many, many tears).

She’s mine. And as hard and frustrating and exhausting as it is sometimes, I wouldn’t change her for anything. 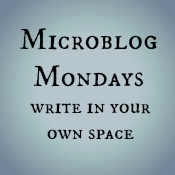 Want to participate? Check out Mel’s post to find out how.

17 thoughts on “That Kid #MicroblogMondays”

what's on my mind

The Best of the Adoption/Loss/Infertility Blogs of 2012

The Best of the Adoption/Loss/Infertility Blogs of 2013